Laufullia Lonie is a two-time breast cancer survivor. Her first bout started at 35, when her doctor urged her to get an early mammogram and found developing cancer cells.

After a lumpectomy and six weeks of radiation, she was cancer-free for eight years until her doctor felt something during a breast exam.

At that point, after discussing it with her family and doctor, she opted for a double mastectomy and chemotherapy. While it was a long journey, she has been cancer-free ever since.

“I didn’t consider myself high-risk,” Lonie, a manager of community relations with Blue Cross and Blue Shield of Illinois (BCBSIL), said. “I’m fortunate that my OB-GYN was a proponent of early screening.”

Lonie is far from alone. Breast cancer is the second-most commonly diagnosed cancer among American women, behind skin cancer.

And while black and white women have about the same incidence rates of breast cancer, key research demonstrates that black women are more likely to die from breast cancer than white women.

Breast cancer tends to be found earlier in white women than in black women, according to the Centers for Disease Control and Prevention — contributing to the disparity in death rates.

“Here in Chicago, black and Hispanic women are less likely than white women to get diagnosed with breast cancer early, when the illness is more treatable,” says Jenné Johns, director of quality improvement and health equity at BCBSIL, citing research from the University of Illinois at Chicago.

Part of early detection is access to early screening, like the mammogram Lonie had at 35. “I’m almost screaming at the top of my lungs for women to do that — especially African American women,” she says. “We seem to die more often from breast cancer than any other group.”

BCBSIL is working with a nonprofit organization called Bright Pink on a pilot program to bridge the prevention gap for breast and ovarian cancer.

Bright Pink was one of the winners of BCBSIL’s Health Equity Innovation Challenge, which was held in 2018 at MATTER. Bright Pink received an award to fuel its work and a chance to pilot its product with BCBSIL. 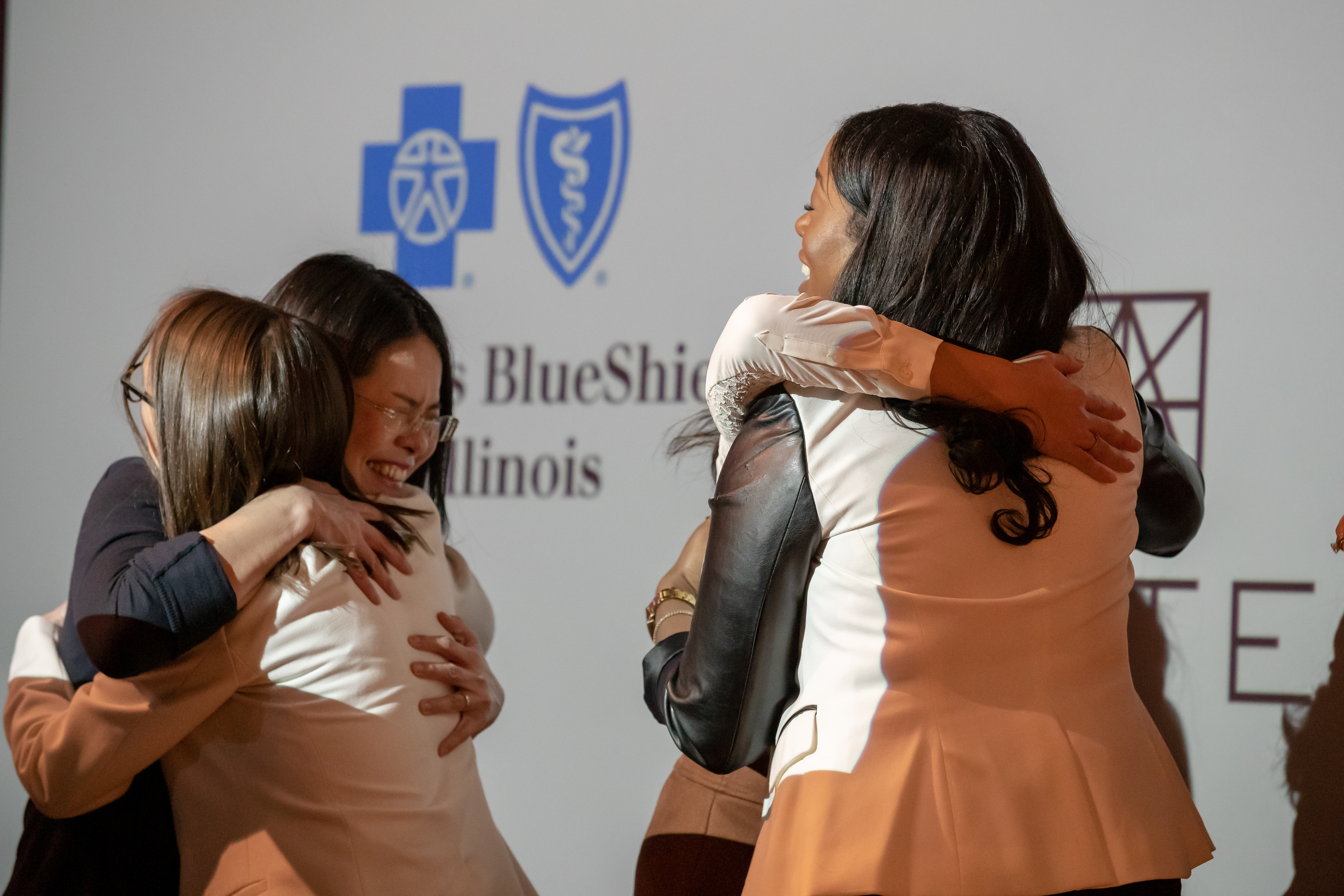 The company pitched its Assess Your RiskTM tool, a quick and conversational digital risk assessment tool that lets women learn about their baseline risk of developing breast or ovarian cancer, based on their personal health, family history and lifestyle choices. Bright Pink then sends follow-up information to women based on their individual risk factors.

More than 1.5 million women have already used the Assess Your RiskTM tool since Bright Pink was founded in 2007. The pilot with BCBSIL aims specifically to fill the prevention gap for breast and ovarian cancer by increasing access to the information and resources women need to know their risk and take a proactive, personalized approach to prevention.

The pilot will focus specifically on reaching African American women between ages 18 and 45, helping to catch women who may be at higher risk of developing breast cancer at a much earlier age.

“We really were excited about the opportunity that this challenge presented to be able to leverage this tool to democratize access to personalized breast and ovarian cancer prevention,” says Meg Lassar, senior vice president of strategy and advancement at Bright Pink.

Members who take the risk assessment as part of the pilot will get customized emails based on their risk level, pointing them to appropriate BCBSIL resources.

To measure success of the pilot, BCBSIL and Bright Pink will use surveys, focus groups and claims data to see if members who took the assessment went on to take risk-reducing action, like making lifestyle changes, scheduling an appointment with an OB-GYN, or getting a mammogram.

The pilot will launch with an event Dec. 7 at the Blue Door Neighborhood Center in Chicago’s Pullman neighborhood. The launch event will feature free fitness classes and a light breakfast buffet, and attendees can use the Assess Your RiskTM tool on the center’s computers.

“We feel like it’s important to address major health concerns of people in Pullman and the surrounding areas,” says Kesha Hammond, manager of health education at the Blue Door Neighborhood Center. “That’s why we’re on board with helping Bright Pink launch the pilot here – to keep our focus on these important community health issues.”

Lonie now works at the Blue Door Neighborhood Center. Her message to other African American women thinking about assessing their risk: Do it. Knowing your individual risk and taking risk-reducing action could save a life.

Video: Getting Ahead of Cervical Cancer With Screening and Vaccination

Video: Why and When to Get Screened for Breast Cancer